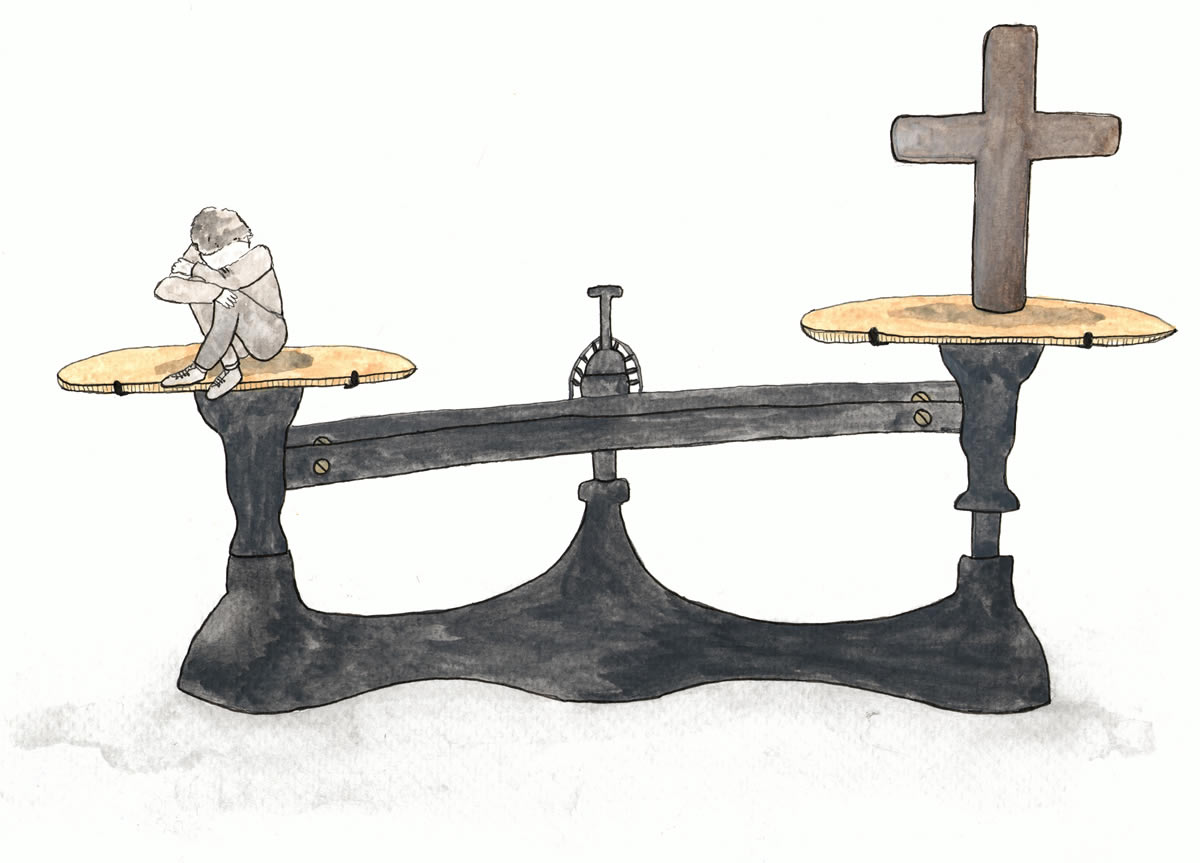 I wonder if you have ever had a crisis of faith?

Not a little wobble, but a serious, life changing episode of doubt?

I’ve spent the last 18 months talking to people about how their faith has changed during the course of their twenties. Nearly 50 have told me their stories and each one is unique. Among them were six young men and women who no longer describe themselves as Christians. At the age of twenty all of them had been heavily involved in their Church or University Christian Union. Most had been in leadership roles: evangelism, worship, small groups, youth work etc.  However decade or so later their beliefs had changed dramatically. Three of them said that they were still open to the idea of ‘Something more than we can see’ but the others were now avowed atheists.

The million dollar question is how do young adults go from one extreme to the other? What causes Millennials to lose their faith?

A number of people have researched faith loss. Among them Andy Frost wrote Losing Faith;[1] David Kinnaman talked to American young adults[2]; and Phil Zuckermann explored faith loss among people from a variety of religions.[3] The short version, unsurprisingly, is that everyone’s story is different.

There are however some patterns which my data mirrors. I share them because they may help shed light on how young adults experience losing their faith and it may help us love them wherever their journey leads. They are after all, more likely to find their way back to Jesus if they’ve been loved rather than rejected or ignored, and either way God still loves them whether they believe in Him or not.

The first (mirroring other research) is that faith loss is gradual. People don’t suddenly go from a profound commitment to Jesus to not believeing at all. It takes weeks, months, even years. Over a period of time their faith just becomes less and less convincing. Something may trigger a decision to renounce belief but typically this is a final straw in an already long term process. One of my participants explained, “There wasn’t a moment where I was aware that I stopped believing, but there was a point that I realised I did not believe and had not believed for some time.”

Zuckermann categorizes types of faith loss. He talks about ‘early apostasy’[4] where those raised within a religious tradition reject it as a teen or young adult but, in line with other developmental changes, that now seems to come much later for some. Kinnaman found that 71% of people who change their faith now do so between the ages of 18 and 29, and that is true of this small sample.[5] Certainly some began a journey of religious disorientation at University or shortly after graduation but for others it came much later in their mid and even late twenties. However, all described the experience of a gradual unsettling and the process of their worldview unravelling until they could no longer maintain the façade of “being a good Christian.”

A second pattern is that faith loss is deeply painful. Most of those I interviewed became tearful at some point as they described rejecting their once strong faith. The sort of ‘transforming apostasy’ they experienced (as opposed to mild – when faith was nominal in the first place) is deeply disorientating. It involves ‘massive psychological reorientation’.[6] One explained, “My belief in God was such a positive thing for my well-being and how I felt. My life is less hopeful now. I don’t approach it with the same purposefulness and meaning.”  Still, he couldn’t pretend to believe any more. Others found it liberating to finally be honest and stop pretending but all of them had found the process traumatic.

There are also relational costs. I’d expected to recruit ex-Christians to interview through their friends who still had faith. It turns out that once people reject their faith they lose contact with Christian friends very quickly. All six described some level of social isolation once they stopped going to church; very few people made the effort to stay in touch. This matches findings where 92% of church leavers reported that no one came after them when they left church.[7] As one of my participants said “It’s really easy to just slip out of Church. No one seemed to notice I’d gone.” Another commented,

“I was expecting to have to do a lot of explaining and a lot of dealing with people having a negative response. Actually a lot of people didn’t really seem to care. That really confused me because in my mind, if you really believe the Gospel then it’s the most important thing by a million miles. So if someone stops believing, or starts moving away [then] that’s a really big deal. It was weird to me that people were just ‘Yeah, Ok.’

So, why did these young women and men reject the faith they’d once been so passionate about?

There is no rule, it’s not a predictable pattern but there were some core factors that came up in their stories and which mirror other research findings.

1. An existential reshaping of their worldview

For many, exposure to a convincing alternative worldview caused them to question beliefs they had never previously queried. Various things triggered this process:

Often the dominant cultural narratives of pluralistic tolerance and secular rationalism were just more convincing or appealing than Christianity.  It was different for each person – but the result was that for all of them, eventually Christian faith no longer seemed credible.

2. An experience of personal difficulty or trauma

A second contributing factor was some sort of personal struggle. It’s fair to say that this is a normal part of most young adult’s twenties (In fact part of developing a stable adult faith is finding a way to make sense of where God is in the challenges of life).  However for these individuals it combined with and exacerbated their existential doubts.

Failing relationships, loneliness, highly stressful work environments, mental health problems and family difficulties were all described to me. God just hadn’t seemed to be there helping or even involved in their pain. One described how they’d found more solace and peace in Buddhist meditation than Church.

3. Disillusionment or isolation from Church

The final factor that these young men and women all had in common was that they had become isolated from their faith community. For some that was the result of multiple relocations as short term jobs forced them to move repeatedly. For others there were relationship breakdowns, struggles with leadership or scepticism over new visions and theological changes.

Several described feeling unable to tell anyone what was going on

Several described simply feeling unable to tell anyone what was going on in their head. They didn’t feel that asking their questions was acceptable, thought that their doubts would be dismissed or that no-one would understand. So they withdrew, sometimes talking to one or two close friends, others enduring the journey of their faith imploding alone. I know the leaders of some of the churches they attended. They are gracious men and women who would have done whatever they could to help had they known. They hadn’t.

This wasn’t a linear cause and effect’ process rather these three factors seemed to weave together. They compounded each other until the young adult involved reached a point where for the sake of integrity they just couldn’t’ sing along, or pretend to believe anymore.

I’m not pretending these findings are a universal pattern for all those who lose their faith.

There is no obvious reason as to why one person bears a harvest 30, 60, 100 fold and struggle deepens their relationship with God while another’s withers and dies before they reach 30.

There’s also no rule that says these six won’t meet God again at some future point. But there are some things for us to ponder as to how we might help young adults as they battle through the demands of their twenties and beyond.

What can we do?

Do we allow people to express, discuss, process doubt?

Or is there an unspoken expectation that everyone believes every Christian doctrine unquestioningly? Those in leadership roles need particular care – they may feel an extra pressure to pretend to have their faith entirely together. Honest conversation, embracing doubt and questions as a normal, healthy part of every faith journey would surely model something better than everyone just pretending!

Are we aware of how demanding life is for young adults?

New environments, relationships, opportunities and temptations are thrown at them on a regular basis. Pastoral care and emotional support are needed throughout the twenties, not just when people leave home for the first time. That 25 year old teacher needs help in a big way – especially if they’ve just relocated, so does the new sales rep, business entrepreneur, the guy with a young family who’s been made redundant again. It’s just possible that the love they receive from a Church community might be enough to keep them engaged with God even if they have serious doubts – until they find a way through them.

How available are we, as leaders or older members, to our congregations?

Do those 25 year olds trust us to come and talk? Do they know we care, know we’ve battled our own doubts, know we will love them even if they are moving away from Jesus? Or do they believe we are too busy for them – and are they right?

And finally – do we even notice when someone ‘drifts away?’

Are friendships real in our communities? Do people’s friends seek them out and maintain contact because those relationships matter, rather than because they see them on a Sunday? In a frenetic world it’s so easy for people to just fall through the gaps. One young man I interviewed became emotional about someone he hadn’t been particularly close to that had made an intentional effort to include him socially even though he’d left their church community. A young woman told me she was no longer in touch with her Christian friends because she’d assumed they wouldn’t want to know her any more. When I said I doubted that (because I knew some of them) she too became tearful.

Losing deep faith is profoundly distressing and takes a considerable amount of time. In an aggressively secular culture young adults need all the love and support we can offer them to come to a secure adult faith that will last them a lifetime and beyond.

It IS their faith – but we can help, if we chose to.